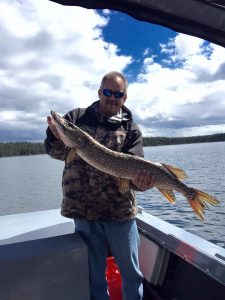 President-Elect Michael Greco, better known as “Grec” by his co-workers.  Mike received his B.S. in Fisheries Mgt. and Wildlife Mgt. from Delaware State College (now University) in 1991.  He started with the Delaware Division of Fish and Wildlife in 1992 as a seasonal advancing to Environment Scientist IV in 2012.  Mike currently serves as the project leader for the Division’s juvenile and adult trawl surveys and the Division’s oyster survey.  He also represents the Division on a number of technical committees for the Atlantic States Marine Fisheries Commission including, but not limited to, Weakfish, Atlantic Croaker and Spot.  In addition, he is the Division’s representative on the National Marine Fisheries Service take reduction teams for Bottlenose Dolphin, Harbor Porpoise and Atlantic Large Whales.  He has been a member of AFS since 1991 and obtained his AFS certification in 2012.  Professionally, his interest is in field work (isn’t everyone’s) and fish ageing.  Outside of work, he is active with a local volunteer fire company since 1993 where he has served as Fire Chief (2010-2016) and President (1998-2002) in addition to other administrative and fire line officer positions. He is an avid Philly sports fan, especially Flyers hockey.

Check out this cool discovery! A juvenile Atlantic Sturgeon was recently captured in the Nanticoke River as part of our ongoing research on this endangered fish. It's possibly an age 1 or age 2 sturgeon born in the Nanticoke River watershed and we are performing a genetic analysis to try to confirm its origin. If confirmed, this would represent the third known spawning population in the Chesapeake Bay. You can learn more about our sturgeon research at dnrec.alpha.delaware.gov/fish-wildlife/fishing/sturgeon/. (Note: This activity was conducted pursuant to NMFS ESA Permit No. 20314.) 📷: DNREC Division of Fish and Wildlife - Fisheries Section ... See MoreSee Less

We are so excited to announce our 2022 Annual Meeting will be in person, so save the dates! Get ready to head to Asbury Park, NJ on November 15-16th. This a great opportunity to network and learn about what is happening regionally in our field. We will keep you updated as we work out the meeting details.mid-atlantic.fisheries.org/2022-annual-meeting/ ... See MoreSee Less

The 2022 Calendar Year is well underway and that means it is time to renew your AFS and chapter membership. We know you’re busy, so AFS has granted a grace period allowing members will still have online access to membership resources for a short period. However, this window is closing soon – February 28, 2022! Please Note: Members who have not renewed already will stop receiving Fisheries magazine; subscriptions will start again once the membership is renewed. Don’t miss out on all the great programming and plans AFS has in store for 2022 – RENEW TODAY! Log in to your membership account to pay by credit card online. fisheries.org/membership/If you’re not a member of the parent organization, we encourage you to join and explore the many benefits of AFS membership and take the next step in your fisheries career. ... See MoreSee Less

Due to the current pandemic, this year’s Mid-Atlantic Chapter Annual Meeting is going to be virtual. We are adapting our traditional meeting to make this first (and hopefully last) virtual annual meeting dynamic and interactive for both students and professionals. We are planning for presentations...
View on Facebook
· Share

Rutgers is hiring a part time Laboratory/Technical Assistant at the Marine Field Station in Tuckerton, NJ. For details, check out the link. ... See MoreSee Less

Rutgers, the State University of New Jersey is seeking a Laboratory/Technical Assistant for the Department of Marine and Coastal Sciences, Marine Field Station which is located in Tuckerton, NJ. Among the key duties of this position are the following: •Trawling, trapping, gill netting, ichthyoplan...
View on Facebook
· Share